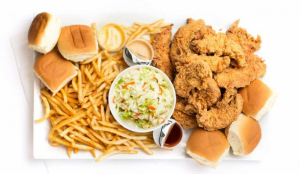 Tom O’Keefe and Nick Binnings have been around the restaurant block a few times.

The two industry veterans have more than 50 years of combined experience when it comes to restaurant operations and franchising. Binnings’ resume includes a stint as vice president of brand development of Another Broken Egg Café, when the brand grew from 15 to 62 units. O’Keefe has past stops at Popeyes, Church’s Chicken, Ruth’s Chris Steak House, and Smoothie King.

The duo has now taken their talents to Southern Classic Chicken, a legacy chicken concept that’s seen systemwide sales increase more than 20 percent in 2020 thanks to a drive-thru model. The brand doesn’t have online ordering capabilities yet, but that’s coming.

The 17-unit, family-owned brand hired O’Keefe as managing director and Binnings as director of brand development to lead its first franchising effort in 31 years of existence.

While a major task, O’Keefe and Binnings know enough to spot potential, and the pair say Southern Classic checks all the boxes of the ideal candidate—the perfect recipe for a franchise format.

“The company has performed extraordinarily well during the pandemic,” O’Keefe says. “Obviously attributable in large part to the drive-thru aspect of model. And that's actually I think a selling point. It has proven now it can withstand what you want to call it, a pandemic or some global event, which I think would also equate to performing well in recessionary times because of price point.”

“And so I think this has been a 30-plus year business that has only shown yet again another example of its resiliency,” he continues. “We remain bullish on the rest of the year, obviously. And in many ways that emboldens us to launch this franchise program because at some point this will be behind us, and we've shown that this model can exist in some instances now, even in a downturn.”

O’Keefe says the Shreveport, Louisiana-based Southern Classic initially thought about franchising about 10 years ago, but the chain backed off because it was building its company base. Over time, the restaurant has developed what O’Keefe describes as a cult-like following in Northwest Louisiana, to the point where it felt franchising was the best move.

The chicken company is targeting areas across Louisiana, Mississippi, Arkansas, and Texas for the first wave of expansion. Currently, the chain has one unit in Arkansas, two in Texas, and 14 in Louisiana.

Binnings explains that Southern Classic will follow a “wagon wheel” strategy in which the growth begins in active markets. Once the brand opens units in these areas and sees success, it’ll continue expansion into the bordering states.

“It's not so much stay close to home, but we want to be near our roots and where we have brand awareness and efficiencies through management, through marketing, and their supply chain,” Binnings says. “For right now, in terms of number of units that we want to open, that's a double-edged sword. I've been part of brands where I've said we're gonna have ‘X’ number of units open ‘X’ number of years. And I fell flat on my face more than once. So we're not going to give you a number of how many units we're going to have in ‘X’ number years, but we'll have as many units as we find great franchise partners and excellent real estate.”

Binnings says the brand derives its strength from a straightforward operational model. Southern Classic’s menu centers around one product—bone-in fried chicken, along with chicken tenders and a selection of sides.

He adds that it’s simple, easy to execute, and plays well in a chicken category that’s seeing continued growth.

“I think the runway’s out there for this brand,” Binnings says. “On the flip side, this isn't a franchise model that we're going to throw out there to every single person who thinks they want to be in the chicken business. We're looking for a very particular type of franchisee or a very particular type of partner. We want somebody who is committed to the same fundamental business practices of the family, and who has experience and who has the capital ability to expand multiple units in key markets.”

Working in Southern Classic’s favor is the fact that O’Keefe and Binnings have rolled out expansion strategies enough times to know the common pitfalls.

From his experience, Binnings says a lack of focus and quality can sink growth. He notes that in today’s industry, brands must be exceptional at one or two items instead of a broader menu. Regarding quality, he says a chain can’t go after the cheapest product just because it’s a numbers game. The key is delivering the best price point to consumers without sacrificing quality.

For O’Keefe, it’s franchises straying too far from where they’re based. More often than not, a franchise system fails because it didn’t have enough brand recognition or equity in a pioneer market, the managing director explains. Then a franchisee fails and that market could be taken off the map for up to a decade because of the damage to the brand.

To counteract these obstacles, O’Keefe and Binnings plan to stick to a disciplined development strategy.

Using an analogy, O’Keefe says Southern Classic is a kingdom and there are certain keys to it. His and Binnings' job right now is to ensure they’re selective about who receives those keys. But overall, the working partners are optimistic about the brand and believe it will be terrifically received in the market.

“They've got great brand equity in the Shreveport area. So now we're going to take that,” O’Keefe says. “We'll start trickling down south because there's no presence yet in Baton Rouge. But there is name recognition because people that travel the state for business or otherwise, they've heard about it. They’ve been to it. …. We are gonna be very contained, very specific, very targeted, both in terms of the prospective franchisees and the markets. And then, of course, the individual sites. Because to me, more than anything that's the biggest factor—you must develop and stay true and disciplined.”